Poroshenko Enters Under Cloak of Darkness 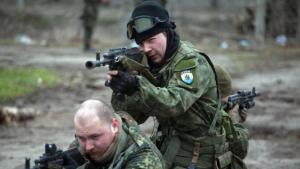 Terrorist attacks in recent weeks have overshadowed the crisis in Novorossiya, where the Kiev neo-nazi forces continue their advance on Donbass. Under the cloak of media darkness, Kiev regime leader Petro Poroshenko is moving in to snatch Novorossiya from the jaws of Minsk. The Ukrainian Armed Forces have stockpiled heavy weapons along the line of contact, the US approved new arms shipments to Ukraine, neo-Nazi saboteurs have blown up Crimean power lines, punitive forces continue to shell Donetsk and nearby suburbs, and Kiev troops have confiscated village houses to make their winter quarters.

Today, the conflict has come to a head. The Donetsk News Agency reports that the Ukrainian Armed Forces have captured settlements in the buffer zone that were not under Kiev’s control at the time of the signing in Minsk. Essentially, Ukraine has launched a de facto invasion of Novorossiya.

DPR representatives Denis Pushilin and Eduard Basurin threaten the resumption of war. But first, they are appealing to the Normandy Trio to prevent full-scale hostilities.

Normandy leaders Angela Merkel, Francois Hollande, and Vladimir Putin achieved major  success in that role at the Paris summit of October 2, when the German Chancellor stood at the height of her power, the French President was less distracted by emergencies at home, and the Russian President still had a strong commitment to Ukraine.

But a lot has changed since October 2. With the Muslim migrant invasion of Europe, the Russian airbus crash in Egypt, the Paris attacks that killed 130, Turkey’s shootdown of Russia’s SU-24, the revelations of ISIS oil smuggling, Erdogan’s threats to Moscow, Putin’s deepening quagmire in Syria, a fomenting coup in Albania, and the Islamic terrorists’ shooting in California, world events have eclipsed the Ukraine crisis.

Caught up in the Syrian-ISIS war, Putin has turned his attention away from Ukraine, and devoted his December 3 State of the Nation Address to terrorism, Turkey and Federation politics, while Merkel’s career unravels as she softens her stance on migrants, and Francois Hollande sinks eyeball-deep in Paris-attack retaliation. The Normandy Trio may have little time for Donbass.

Left to its own devices, will Novorossiya fight again?

The capture by Ukraine of settlements in the “neutral” zone in the south of Donbass is a prerequisite for the resumption of hostilities. This was announced today at a briefing in the DAN press center by the deputy commander of the DPR Ministry of Defense Corps Eduard Basurin. “Yesterday, the military and political leadership of Ukraine said the seizure of the settlements Pavlopol and Pishevik in the Mariupol region was ‘victorious’. Data on violent capture of settlements by the UAF [Ukrainian Armed Forces] is a precondition for the resumption of the outbreak of hostilities,” said the corps representative.

Eduard Basurin stressed that the settlements Shirokino, Vinogradnoye, Pavlopol, Pishevik, and Gnutova, located in the buffer zone near the line of contact between the parties, were not under the control of the Kiev authorities at the time of the signing of the agreements. “I want to remind you that with the signing of the Minsk Agreements on February 12, 2015, the parties are obliged to withdraw heavy weapons to prevent violent seizure of settlements in the so-called ‘neutral zone’,” said the representative of the Defense Ministry. On the eve of December 3, the Ukrainian General Staff announced that Pishevik and Pavlopol previously were in the neutral zone, the security forces brought them under the control of Kiev, and the administrative authorities of Ukraine began work in the villages.

The Donetsk People’s Republic has sent a notification addressed to the OSCE about recent facts of the capture by the Ukrainian military of settlements on the front line. This was stated to DAN by the head of the DPR delegation to the talks in Minsk, Chairman of the National Council Denis Pushilin. “We have sent a letter to the address of Martin Sajdik, coordinator of the contact group in Minsk as well as the special monitoring mission of the OSCE,” the Speaker of Pariliament said in a statement. “Also we call on the Normandy format to assess the actions of Kiev and prevent the resumption of full-scale hostilities caused by Ukraine’s gross violations of the Minsk Agreements.” Pushilin clarified that they are talking about the settlements Pishevik, Pavlopol, vinoglodnoye, Gnutova, Shirokino, Bahmutovka and Zhovanka. According to the Speaker, the actions of the Ukrainian side are increasingly aimed at the escalation of the conflict. “During the removal of equipment at a time when the safety of the zone should only increase, this is unacceptable,” said Pushilin.

We recall a similar assessment of the actions of Kiev were already given by DPR Defense Ministry deputy corps commander Eduard Basurin, who named the capture of the villages of Pishevik and Pavlopol in the south of Donbass as a precondition for the resumption of hostilities. On the eve of December 3, the Ukrainian General Staff announced that Pishevik and Pavlopol previously were in the neutral zone, that the security forces brought them under the control of Kiev, and that the administrative authorities of Ukraine began to work in the villages. Full text of the statement by Denis Pushilin [is found in the article below].

We have to admit the fact that the actions of the Ukrainian side are increasingly gaining momentum towards the escalation of the conflict. Today the military forces of Ukraine carried out the action of the passive attack, and seized settlements that are in the buffer zone, namely Pishevik, Pavlopol, Vinogladnoey, Gnutova, Shirokino, Bahmutovka, and Zhovanka. During the removal of equipment, at a time when the safety of the zone should only increase, this is unacceptable.

We have sent the appropriate letters to Martin Sajdik, coordinator of the contact group in Minsk as well as of the special monitoring mission of the OSCE. We also call upon the Normandy Four to assess the actions of Kiev and prevent the resumption of full-scale hostilities due to Ukraine’s gross violations of the Minsk Agreements.

New Lugansk Leadership Offers Hope For Donbass Unity - Eduard Popov - Introduction - LPR Presidential Transition: The Dark Side and the Light Side - By Kennedy Applebaum - Lugansk after the Coup: Towards a Unified Donbass People's Republic? - By Eduard Popov - Fort Russ - November 26, 2017

Malorossiya vs. Minsk: Is Poroshenko a Naked Emperor?

July 19, 2017: The State of Malorossiya is What the Ukrainians Believe - By Karl Pomeroy - Quemado Institute Main Post 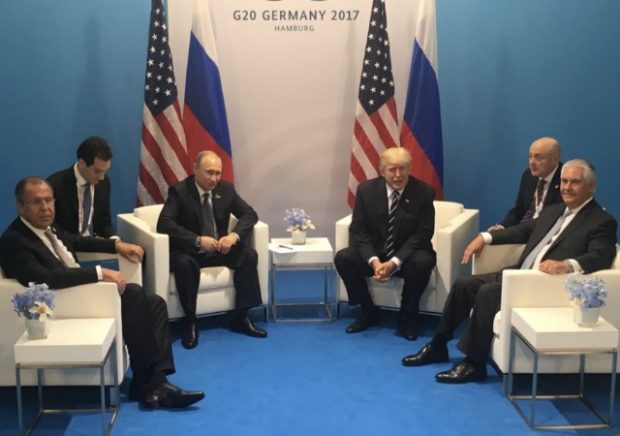 July 9, 2017: Putin-Trump G20 Talk: Perspectives of the Russian Leaders - “Mr Trump’s television image is very different from the real person; he is a very down to earth and direct person, and he has an absolutely adequate attitude towards the person he is talking with; he analyses things pretty fast and answers the questions he is asked or new ones that arise in the course of the discussion.” –Vladimir Putin, July 8, 2017